Today I ventured to Iran. Why? No real reason, but I am glad I did. For my first foray into middle eastern desserts I stumbled (read: Googled) upon faloodeh. Faloodeh is a cold dessert that dates back to at least 400BC – making it one of the oldest known desserts in existence. It is rumored that faloodeh evolved from “fruit ice,” or snow sweetened with honey and fruit syrups. Whatever the evolution, faloodeh is now one of the most popular desserts in Iran and is made with many different flavors and garnishes.

Like the Chocotorta, this recipe only has four ingredients. Unlike Chocotorta this dish is basically foolproof (I know some would say Chocotorta is also foolproof; but that is clearly not the case given my misadventures). Back to the faloodeh: simply cook the noodles, make a sugar syrup, combine, and freeze. After a few hours you have a slushy-like dessert that can be flavored to your liking. In this instance I used rose water, a traditional flavoring, and promptly realized that I don’t really like rose water. The next time I make faloodeh I will probably use orange essence or lemon for a slightly sour twist. 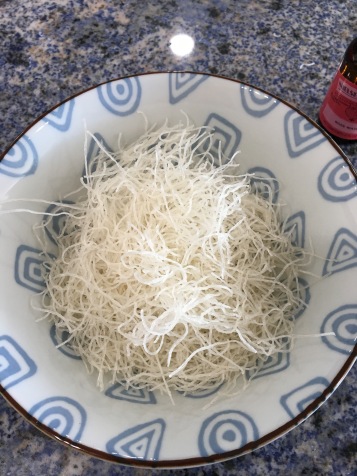 This would be delicious on a hot summer day. On a cold winter day in Colorado, not so much, at least for me. However, several other taste testers found that, while the first bite was very foreign, the dish was a hit.

This recipe comes courtesy of The Kitchn, with slight modifications.

1 tbsp rose water (or other flavoring of your choice)

Heat the sugar and water in a small saucepan, stirring the pan occasionally so that the sugar does not stick to the bottom and burn. Once the sugar is dissolved, remove the pan from the heat and add in the rose water. Allow the sugar syrup to cool.

Meanwhile, cook the noodles by pouring boiling water over the noodles until submerged. Allow the noodles to soak for roughly five minutes or until soft. Once cooked, drain the noodles and cut or tear them into two-inch pieces. Combine the noodles and syrup in a shallow baking dish and place into the freezer. Stir the mixture occasionally with a fork. Freeze until the desired slushy consistency is reached, about three hours. Serve by scooping into bowls and adding the garnish of your choice.

Tea is the national drink of Iran and, fittingly, Iran is the 7th largest tea producer in the world.