Oh Argentina, how I love your picturesque countryside and your crazy (in a good way) chefs. Someday I will visit your gorgeous mountains and eat my way from city to city. Until then, I will have to make due with eating alfajores by the handful.  Speaking of which, alfajores are a perfect dessert to make!

…except the alfajore, is apparently Arabian in origin.  Google, however, has made me aware of another delectable Argentine dessert: the chocotorta, a mighty delicious home-grown Argentine dessert that makes use of the same key ingredient in alfajores – dulce de leche. While you may not see chocotorta offered in many restaurants or cafes, Google assures me that this simple cake is frequently made for birthdays and other celebrations. There are multiple different variations – some use crumbled cookies and others whole cookies; some are fancy and some very simple. But at its core, this is a cake of chocolate cookies, dulce the leche, and cream cheese. Very simple, right?

Where do I begin? There are all of four ingredients (six if you count the optional glaze) and still, I am pretty sure I flubbed the whole thing.

The recipe is incredibly simple: a layer of chocolate cookies dipped in milk topped with a layer of cream cheese and dulce de leche. Repeat 3x. If desired, boil cream and combine with chocolate to make a chocolate glaze as the final layer. That is it. A grand total of three sentences. So where did things go wrong?

Being the constant over-analyzer that I am, I came to the conclusion that making a crumble out of the cookies and milk would prevent leakage of the cream layer more effectively than layering the whole cookies side by side. This, I thought, would be especially true given that I was trying to fit round cookies into a square pan. On this assumption, I went ahead and took out my left over work anger on some chocolate cookies with the use of a plastic bag and a rolling pin (Side note – this is a great way to make a crumble if you do not own a food processor).

I then added the milk but made the foolish mistake of not adding it in small amounts. I therefore ended up adding too much and instead of the just-combined texture I was looking for I ended up with this gloopy mess. 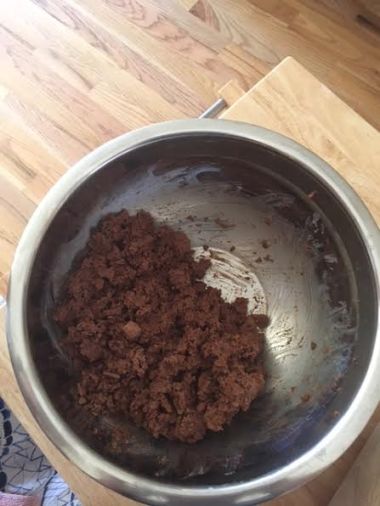 I figured it would still taste good so I managed to press some of this mixture into the bottom of a small pan. Then, trying to salvage the whole situation, I used some of the extra whole cookies to make a non-crumble base in another small pan. I would like to say I thought ahead and decided to test out which method, crumble or whole, worked better – but I clearly don’t deserve that much credit.

With the cookie layer already off to a rough start, I moved on to making the cream and dulce de leche mix. This sounds incredibly easy, and it is! The fault here was caused by my over ambitiousness: I was determined to make homemade dulce de leche.

I made the dulce de leche the weekend before using the boiled sweetened condensed milk method, and it tastes great on its own. I have been enjoying it for days on top of scones as a, wait for it, “scondiment.” However, as shown in the pictures below, my dulce de leche is more of a medium brown color and while there is a great caramel flavor, it is more subtle. When I combined my dulce de leche with the cream cheese, the caramel flavor got completely lost and all I was left itch was a oddly sweet cream cheese mix.

If I were to make dulce de leche again I would use the pan method to make sure that I got a nice dark-brown color and rich caramel flavor. The sweetened condensed milk method is also neither a) as time saving as one expects nor b) as relaxing. It took about three hours to get dulce de leche of a mild brown color and the whole time I was stressed that my water was too hot or there wasn’t enough and the cans would explode. Even easier, buy the pre-made dulce de leche from the grocery store. It costs all of $2.50 and is guaranteed to have a rich caramel flavor and be stress-free.

I also added the optional chocolate glaze to the crumble version, thinking that it needed some extra sprucing up given my earlier failures. All the layers complete, I popped both pans into the fridge for four hours. 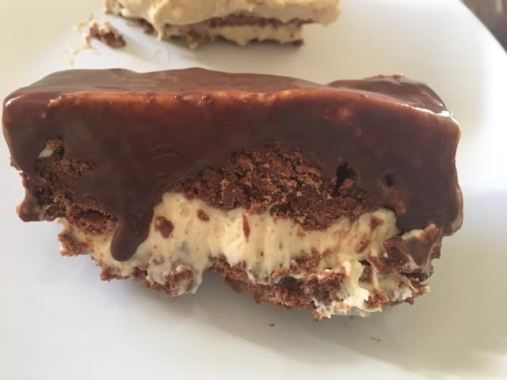 Chocotorta is another name for cheesecake. A chocolate graham cracker crust with cream cheese (slightly caramel) filling. If the dulce de leche had been stronger the result would have been a slightly tastier cheesecake, but still a cheesecake. This would be an easy way to make an impressive layered cheesecake for a holiday party, but otherwise very underwhelming. Sigh.

The recipe I used comes from Tastemade and has a helpful video demonstration.

½ cup chocolate milk (can be substituted for plain milk, coffee, or kahlua if you need some alcohol in your desserts)

Feeling down after messing up your chocotorta? Argentina is the place to be. It has the most psychologists per capita of any country.