One of my coworkers is on vacation in India right now and I am very envious. True, I would be almost as envious no matter where she was since it would mean she wasn’t sitting at work like me, but that is besides the point. The point is, I have been hearing all about her travel plans and decided if I couldn’t join her in India I would do the next best thing and tackle the dessert of India – gulab jamun. In the spirit of full disclosure, apparently gulab jamun is originally from Iran, but this dessert has become so synonymous with festive occasions in India that it seems like an appropriate choice.

Well folks, I think I screwed up right away on this one. Either, milk powder is not the same thing as dry evaporated milk or the evaporated milk I had was old.  What I used looked more like sprinkles than a powder and I immediately wondered how using it would result in the super smooth balls that I expected.

Turns out, it wont. As you can see from the photos below the dough balls are very rough, and that was even after adding more yogurt than the recipe called for. I have to believe that this epic ingredient fail was also the reason the balls ended up so dense, which in turn prevented the sugar syrup from soaking all the way through, which resulted in the insides being dry. Either that or I failed this bake multiple times (which is also plausible).

Fortunately, once the dough balls are formed the process is straightforward – fry, remove from oil and drain slightly, then drown in sugar syrup for as long as your will power allows. Since I am weak-willed when it comes to desserts I don’t think I let these soak long enough. Perhaps if I had waited another hour the syrup would have soaked deeper, but maybe not given the initial mixture may have been at fault. Regardless, I have no regrets for digging into these when I did. 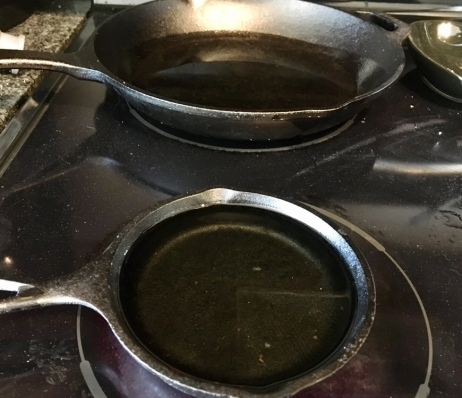 I decided to use my mini cast iron skillet which, while adorable, thrifty, and fun to use, was not the tool for the job. I would recommend using a dutch oven deep enough to fully cover the balls so that they do not sit on the bottom and burn (as clearly happened to some of mine). Yes this requires more oil, but I think the result would be worth it.

Despite all the failures, I actually consider this bake a success. After all, it is hard to find fault in the equivalent of a one-bite donut saturated with sugar, even if that donut isn’t very smooth and the insides aren’t quite as sweet. I will absolutely try to make this dessert again since the process seems like it will get easier with a little practice and the right ingredients.

I followed a recipe from India Healthy Recipes (don’t be fooled – gulab jamun is definitely not healthy) but an almost identical recipe can also be found at Foodviva.

Oil of your choice for deep-frying

Make the simple syrup by mixing the ingredients together in a small pot and heating until the mixture thickens – roughly 230 degrees Fahrenheit. Remove from the heat and set aside.

Make the dough balls by mixing together the dry ingredients and then adding the ghee, yogurt, and milk. If the mixture is too dry add more milk or yogurt (I ended up roughly doubling the yogurt). The dough should just form into balls. If it is too soggy it will fall apart when fried.

Heat the oil to roughly 370 degrees Fahrenheit. Meanwhile, form the dough into 12 – 14 balls each slightly smaller than a golf ball.

Add the balls 1 – 2 at a time to the oil and fry for 2-3 minutes until golden brown. Watch the temperature of the oil to make sure it does not fluctuate too much with the addition of each ball (tips on frying here).

Once fried, remove from the oil using a slotted spoon to allow the oil to drain off and place into the simple syrup. Let the balls soak for at least 3 hours. I don’t think it is possible to over-soak these little guys.

When ready to serve, remove from the syrup and, if desired, garnish with pistachios slices.

75% of all the world’s spices come from India. Thank you, India, for making my love affair with exotic spices possible.