I recently visited Germany, Austria, and Hungary partly because I wanted to see the Christkindle Markets, but mainly because the flight to Germany was ridiculously cheap (thank you IcelandAir!). While there I spent almost the entire time consuming some type of dessert or pastry. Who needs real food when there are goodies like Lubkuchen, waffles piled high with nutella and strawberries, and the delicious warm cinnamon-sugar bread things? Continuing my dessert rampage, while in Vienna, I did what any good tourist would do and headed to the Cafe Central to get a slice of sachertorte – a dish so synonymous with Austria that no google search was necessary. However, a later search confirmed that sachertorte is indeed an appropriate choice to represent Austria.  In fact, it is actually on the UNESCO heritage list. The sachertorte at Cafe Central was pretty tasty, so with that fond memory in mind I embarked in my own effort to recreate the dish.

The cake was relatively simple. While the original recipe called for vanilla sugar, I used vanilla pudding mix on the theory that it would provide the same flavor and add extra stability to the cake. If you happen to live next to a spice store and can afford the vanilla sugar go for it and let me know what happens. Maybe then I can blame all of the failures I had with this cake on being too cheap and lazy to go find special sugars.

A few hints courtesy of my stepfather and sous chef for the day:

The glaze was not so simple. I made the glaze three times. First, I used the recipe on the Austrian National Tourist Office website, which uses sugar, water, and chocolate. As you can see below this created a runny mess that never set.

Second, I went back to the basics with a recipe using only cream and chocolate that required the chocolate to be melted separately and added to slightly simmering cream. This resulted in instant seizing that couldn’t be saved with over a stick of butter (I am having flashbacks to Canada).

Finally, I simply heated the cream and chocolate together. The end result was a glaze that was grainy but tasted good and firmed up nicely. 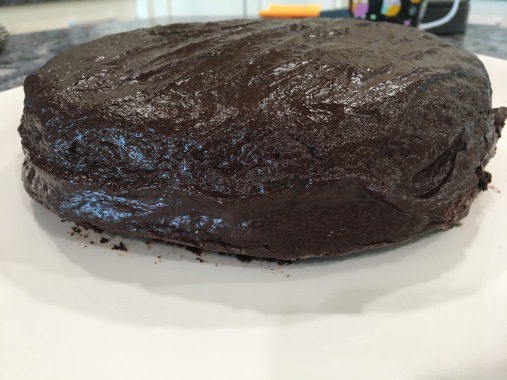 To summarize – I still cannot make a chocolate glaze. Sigh.

With all due respect to Mr. Sacher, this is just a chocolate cake with a chocolate glaze and apricot filling. And, in my opinion, it isn’t a very good chocolate cake. If I am going to eat cake it better leave me in a sugar haze afterwards. Sachertorte does not. While this is clearly not my type of cake, if you enjoy a less-sweet chocolate cake then by all means bookmark this page and bake away.

Pinch of cream of tartar

Jar of apricot jam (the cheap stuff, the less chunky the better)

Preheat the oven to 180 degrees Celsius, 355 degrees Fahrenheit (see note above re: convection bake vs. regular bake temperature). Grease and flour a cake pan. Melt the chocolate and set aside to cool slightly. Cream the butter, powdered sugar and vanilla. Stir in the egg yolks.Whip the egg whites and cream of tartar until peaks start form. Add salt, sugar and beat to a stiff peak. Combine the melted chocolate with the egg yolk mix. Alternative fold in the flour and egg whites, starting with the egg whites. Poor in cake pan and bake for 35 minutes.

Once baked, removed the cake from the oven and let cool completely. Meanwhile, heat the apricot jam until it is slightly runny. Once cool, cut the cake in half and cover with jam. Place the top half back on and coat the top and sides of the cake with jam.

To make the glaze, break the chocolate into small pieces and combine with cream in a pan. Heat until just melted and then reduce from heat slowly. Poor glaze over cake. Let the glaze set and serve with whipped cream (if desired and handy).

The oldest zoo in the world still in existence is on the grounds of Sconbrunn Palace in Vienna. I visited the Palace. I did not visit the zoo. It was cold.